Mitch Webb is in his final semester studying Music Production at The University of Texas at Austin. He regularly composes, produces, and performs within the Austin area. He is a multi-instrumentalist who has performed on French horn with the UT Symphony Orchestra, as a vocalist in UT’s Ensemble 109, and on trumpet, piano, and guitar in venues around Texas. He has recently been producing music with Austin musicians and working as the lead sound designer and composer for a small game studio. 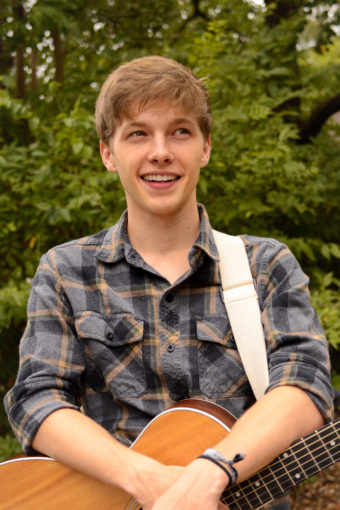 “Life starts out with a few years of taste-testing. Growing up, I sampled anything I could get my hands on — sports, photography, film-making, sculpture, you name it. But there was really only one staple in my diet: music. I grew up singing in the car with my mom on the way to piano lessons. Then came middle school, and with it the French horn. Almost as soon as I began — and against my French horn teacher’s wishes — I split my practice time by picking up the guitar and joining the jazz band on trumpet.

When high school ended, I rushed my way into an engineering degree at UT Austin. I chose Acoustical Engineering — a combination of the two things I knew I had a knack for: music and math. Although I spent every second of my free time practicing and searching for musical outlets, I tried to convince myself I had made the right choice. It wasn’t until the next year that I realized where my priorities were, flipped my world around, and transferred to the Butler School of Music to study music production.
The passion and beauty I found in music production quickly and consistently reaffirmed the choice I made. I immediately began exploring the vast possibilities within music, from performing in orchestras to producing albums to composing for multimedia projects. I studied music production under then, professor Gary Powell, a series of courses which cultivated the ability to produce music across any genre, with any number of restrictions, often under some severe time-constraints. With Gary Powell, I was also coached and performed with the studio vocal group, Ensemble 109. Here I learned the intricacies of singing in a studio environment, and developed the capability to work with and coach vocalists in order to bring out the best of their abilities. With each pursuit came knowledge, versatility, and the ability to communicate with musicians of all types.”