Olesya Kolos is a classically trained pianist from Moscow, Russia. She developed her passion for film scoring and music production during her studies at the University of Texas at Austin. Olesya likes to create media content by combining visual arts with music. Among the projects she produced for her production company, called Kolos Studios, are the short film scores, promotional videos, music for podcasts, and other.

What I am really excited about in beginning this journey with Elesvee, is the diversity that people bring to it.

Most of her compositions are melody driven. Playing a lot of cantilena music while growing up made her able to create arrangements where an accompaniment would gracefully surround a melody and make it memorable. 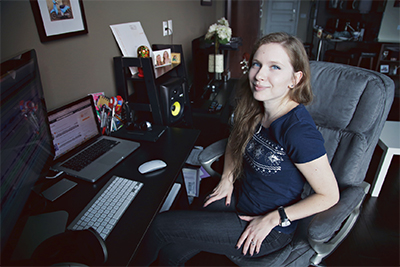 Composer/Producer Olesya Kolos: Graduate of the University of Texas in Music Production at home in her personal studio.

Melody is the first element of a piece she hears when listening or composing, and finds it a very important one.
Though her musical tastes were influenced by the world of classical music predominantly, she appreciates all sorts of different music – anything from cool jazz to deep house. “What I am really excited about in beginning this journey with the Elesvee, is the diversity that people bring to it. Just as diverse music can be, everyone involved here has a story to tell, and everyone has different backgrounds. It is always fun to bring talented people together to learn from and create opportunities for one another.”

The fabulous Olesya Kolos is our adviser for venue management and tour support. She is also a wonderful composer, music producer, and audio engineer. What we don’t know is if she can actually bake Russian Pirozhki!