With a wide range of studio credits from children’s records with Walt Disney Records to progressive rock legends such as Styx and the late Alan Holdsworth, JR Taylor draws from a diverse musical experience, keen intuition, and a passion to help others realize their creative vision and maximize the emotional communication through their productions. 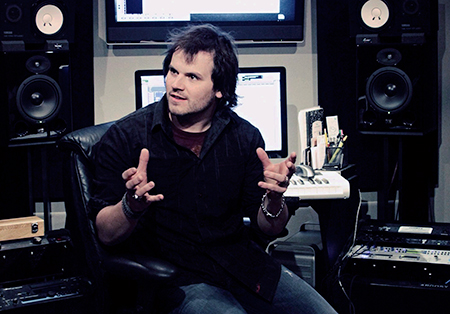 A native Texan, JR was born and raised in San Antonio. His professional music experience began in high school and continued through his years studying music at the University of Texas at Austin. He began working with Gary Powell in 1999 on projects as diverse as barbershop quartets, hip-hop, rock & roll, and full orchestral productions. As a freelance engineer/producer, JR has worked with some of the world’s most respected musicians.

As an artist, his experience as a multi-instrumentalist performer and writer, fluent in the language of songcraft, are conducive to his work as a producer. JR has written and performed across genres, from fronting his own progressive rock bands and instrumental guitar projects, to touring on bass with award-winning Texas Country artist, Pauline Reese, to touring on guitar/piano/vocals with Dove award-winning CCM artist, Geoff Moore. He has written & recorded music with Styx members, Ricky Phillips and Todd Sucherman, that was pitched for a Hollywood film soundtrack.

JR specializes in turnkey production for songwriters. Whether playing all the parts himself or knowing the perfect hired guns, he takes even the most raw musical ideas and turns them into radio-ready final masters with empathic sensitivity to the artist’s creative vision.

“In both live and studio settings… working with JR is inspiring – it reminds us why we love music so much in the first place.”
– Katie Eckeberger (My Anchor Holds)