Nick Hager is a recent graduate of The University of Texas at Austin and studied Music Production under Gary Powell. As an audio engineer, Nick runs sessions with the ELESVEE coaches and mixes all sessions to their most perfect performance to instruct students on how to continually improve. 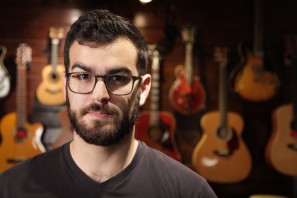 As Studio Manager, he installs, troubleshoots, advises, and prepares all of the equipment and software in the studio for each session.
“Ever since I was little, I loved listening to music and picking apart the different pieces of each song to find what I liked and didn’t like. I grew up listening to everything from Disney to disco and I learned a lot about how versatile and varied music could be. At the end of 5th grade, I decided to join band and play the clarinet, which I continued playing into college. At 12, I decided to learn to play the bass guitar and soon after picked up guitar and self-taught myself as many chords and techniques as I could.”

“I decided that music was what I wanted to pursue
and the idea of creating and producing music inspired me
far more than any other pursuit.”

My freshman year of high school afforded me the opportunity to pick up tenor saxophone and become much more familiar with jazz and funk. Through my interactions with the jazz band, I was invited to play drums for our secondary jazz band for the duration of my senior year. Despite my drumming experience (Rock Band…), my director had faith that I would learn quickly and I performed in several concerts throughout the year.

I decided that music was what I wanted to pursue and the idea of creating and producing music inspired me far more than any other pursuit. I auditioned for the Butler School of Music and was accepted into the clarinet studio, where I performed in various symphonic bands and jazz bands for two years. Throughout college, I was privileged to be a part of the Longhorn Band, marching every Saturday in the fall down the field, clarinet in hand. My wide variety of musical experiences have informed my ear as a producer and enabled me to feel comfortable in every genre, exactly like the ELESVEE coaches.”

Nick has worked as the Studio Manager for Powell Studio Productions since graduating in May 2015 and helps compose, arrange, record, mix, film, edit, and produce a variety of projects for Gary Powell, Ensemble 109, and ELESVEE.