Vikrant Muthusamy is a film composer who holds a Bachelor of Arts in Music Production, a Bachelor of Science in Radio-Television-Film, while also earning a Business Foundations Certificate – all from the University of Texas at Austin. As a music composer, Vik has composed over 20 original pieces and scored over 20 short films in Austin and Los Angeles which includes the PBS documentary “Canine Soldiers:The Militarization of Love” – directed by Nancy Schiesari. 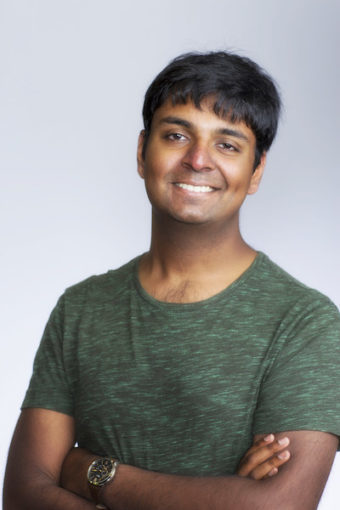 My innate passion for music and film was fully supported by my parents,even though neither are a musician or filmmaker. My dad, however, is an avid film goer, while my maternal grandmother has an artistic background in both music and painting. My dad took me to my first film theater experience when I was four years old – at a United Artists theatre with a “Galaxy” screen. It was also during this time that I started learning piano by suggestion of my mom. It was not something I had to do, but it seemed fun and interesting.

Later on, with more piano lessons and more film theaters, I unconsciously became more focused; more fully appreciating the marriage between film and music. It was at this point that I realized why I still remembered my experience as a four-year-old. “Experience” is the key word there – everything from the arc of the story’s characters to the colors and transitions on screen, to the sound design of the theatre, to the textured melodic underscoring. It was the great escape for such a quiet isolated boy.

When I was 16, I decided to compose my first original piece, borrowing ideas from films and video games I played as a young boy. While the piece definitely sounded like a 16-year-old composed it, it was the first time I caught the creative bug, discovering then that my imagination had more stories to tell. Thankfully it did, just in time for me to choose a career path for college. Clearly, I wanted to tell stories through music and film while exploring how creative I might be.

I auditioned for Gary Powell at UT’s Butler School of Music and was accepted into his Music Production degree program. When I first sat down and talked with Gary, I asked him what experience I could get in the field of film music. Gary immediately directed me to Nancy Schiesari – a prolific film director in Austin, who took the time to listen to my productions. Intrigued by my portfolio at the time, Nancy allowed me to present myself to other filmmakers who were looking for a reputable film composer. During my freshman year at UT, I scored three short student films. These early projects, helped generate an early reputation in Austin as an upcoming film composer.

After hearing about the positive buzz, Nancy asked me, during my sophomore year, to score her PBS documentary “Canine Soldiers: The Militarization of Love.” The film premiered at the 2016 Austin Film Festival. This was a major highlight of my early career; reflecting the support from my whole family. By the time it aired on PBS in May, 2017, the same month I graduated UT, I had scored over 20 short films by filmmakers in Austin and Los Angeles (through the UTLA program). Not to mention, I also developed my music production skills under the mentor-ship of Gary. Not only have I become a professional in this field with a documentary film credit under my belt, but I also know how to collaborate with other artists in the intense studio production environment, always in an effort to produce and deliver high quality, memorable work.

I look forward to composing music for new film projects and collaborators. Exploring the limits of my own creativity is dynamically fun and will hopefully become a lifelong adventure.